Two teams saw an increase of more than five percent. Washington’s audience grew by 7.3 percent (the stadium was still at less than 80 percent capacity), and the Bills have a 6.0-percent jump.

Several years ago, the league suspended the blackout policy, which blocked local broadcast of home games if all non-premium tickets weren’t sold. Despite efforts to improve the in-stadium experience, there’s no substitute for winning. 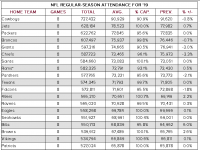 These numbers as presented by the NFL do not tell the whole story. They, in fact, minimize the effects of the decline in attendance. The NFL keeps emphasizing that the attendance that has been lost has more than been compensated for by the significant increased TV viewership that has occurred during the decline. Attendance is mandatory for the NFL to attain much of their revenues. And the TV viewership numbers are disingenuous, in that if an individual turns an NFL game on for 5 minutes, it is counted as a game view. As this trend continues, the NFL /teams will be continuing to increase ticket, parking, food and drink, paraphernalia prices.........and its hand in the gambling industry in order to boost their revenues at the cost to fans.